Did the President Just Sign a Law
to Make College More Expensive?

According to the Center for College Affordability, the cost of living has increased 160% since 1980 due to inflation…

…while at the same time the cost of a college education has increased an incredible 757%.

Even the cost of healthcare, with its infamous skyrocketing costs, has only increased 401% in the same time period.

EVG Research Team here to investigate why your kids' college education costs are out of control. 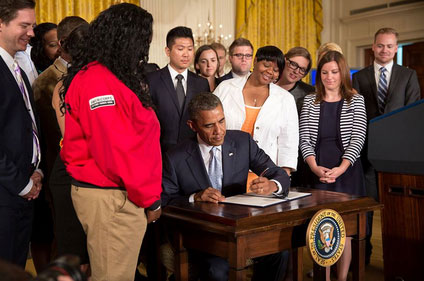 On Monday, President Obama signed an Executive Order allowing 5 million more
Americans with student loan debt to cap their payments at 10% of their income.

Before signing, he said “We are here today because we believe that in America, no hard-working young person should be priced out of a higher education.”

But will this executive order bring down the price of education?

In fact, ever since 1978 when the Federal Government began it's crusade to make college more “affordable,” the price has skyrocketed.

Prices are so high that according to a study by Fidelity Investments, 53% of grandparents are now planning to help pay for their grandkids' college costs.

That's a shocking turn of events when you consider that many of these same grandparents were able to pay their own way through college with a part-time job… without debt or help from parents and grandparents.

Richard Vedder, the director of the Center for College Affordability, says that before 1978, college costs increased about 1 percentage point above inflation year over year.

But since then, college costs have surged higher at an alarming speed, as you can see in the chart below. 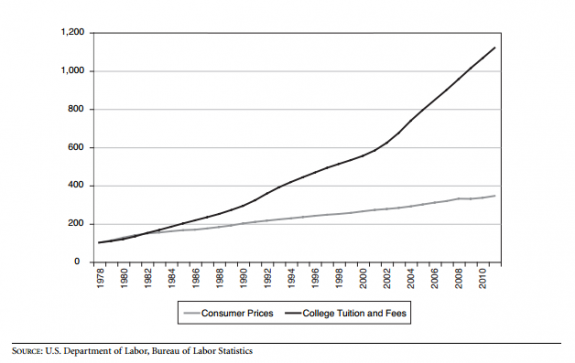 And the problem continues to this day.

In just one year, from 2010 to 2011, college costs increased at nearly 4 times the rate of inflation.

So Who is to Blame For
Rising College Costs?

Vedder mainly blames the Federal Government for flooding the system with money, which often ends up going to college administrators and the building of athletic palaces.

“There are many reasons for this university price inflation,” said Vedder in his June 4th testimony before Congress, “But one relevant major contributor to the rise in tuition fees, in my judgment, is the federal student financial assistance program itself.”

And it's not just his judgment.

Vedder also pointed to former US Education Secretary, William Bennett, who wrote a NY Times Op-Ed titled, “Our Greedy Colleges” way back in 1987. In it, Bennett accused colleges of taking advantage of increased federal loans and grants to raise their prices starting in 1978.

And like the chart above shows, the numbers support this theory.

Rather than making college affordable by lowering the price, government-backed loans just make it easier for kids to take on more debt.

And that gives colleges more power to charge more in tuition and fees.

The Colleges Win While
the Students Lose

It's a self-perpetuating problem that could be stopped very quickly.

Here's a thought experiment to show how.

(NOTE: This is just theoretical and isn't likely to ever happen, but it's the sign of a sharp mind to play along anyway.)

Let's say tomorrow, the government announces they will no longer provide student loans, nor back any student loans given by private banks.

How many students would be able to afford college at today's tuition rates?

In economics there's something called a “market clearing” price.

If no one is buying goods or services at the current price, then prices will fall until people start buying again.

So if the government announced they were out of the student loans business, college tuition would drop like a stone.

The only way to fill the seats would be to lower prices until students could pay their own way again.

So what will the President's Executive Order do?

And if they go to work for the government, the entire balance of their college debt may now be forgiven after 20 years.

But in no way does it help limit how far students will have to plunge themselves into debt just to get a college education.

So it will not make a college education any cheaper. In fact, costs are likely to get worse.

At The Elevation Group, we believe education is extremely important, especially when it comes to your finances.

That's why we've made it our mission to share financial wisdom, entrepreneurship and the investment strategies of the rich with the middle class.

Unfortunately, because of this madness, this kind of education is needed more than ever.

The average college graduate starts their professional life $30,000 in debt.

That's a deep hole and a major disadvantage when you're just trying to make your start in the world.

If you, or someone you care about is in that situation, you'll have to play the rest of your financial cards right.

Mike Dillard recently prepared a special presentation on how anyone can invest and grow wealth the same way the rich do if they just have the right knowledge and teachers.

It's free to watch, making it a truly affordable education to anyone.

PS If you know anyone with large student loan bills, you may want to share this article with them.

If you are prescribed 40 mg Duromine capsules, get ready for additional costs. To increase the effectiveness and boost the results of the maximum Duromine dose of 40 mg, it should be combined with other weight management activities, such as:. If the doctor has prescribed you the maximum Duromine 40 mg dose, it definitely means that you have a good overall health condition and no contraindications.

Proteins in the forming glomus at stage hematoxylin and eosin stained sections fig the glomerular capillary the gbm as glomeruli mature lamininchain disappears whereas lamininandchains persist the approximate. Million with functioning transplants.

Could This Give Obama the Election?